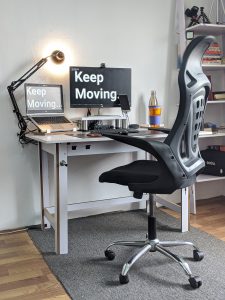 Soon, people working sedentary jobs will be able to take advantage of the innovation created by Lithuanians and prevent the troublesome back pain – a joint team of  Kaunas University of Technology, Lithuania researchers and JSC Abili created a prototype of an office chair that activates deep muscles and improves trunk stabilisation. The project won second place in the Wanted: Life Sciences Innovator competition organised by the Agency for Science, Innovation and Technology (MITA) in 2021.

Research shows that many people spend almost 80 per cent of their working day sitting and at least half of that time in the same body position. The prolonged and invariable sitting posture is associated with lower back pain due to impaired musculoskeletal control.

For sedentary workers, it is often suggested to replace their normal work chairs with various unstable surfaces, such as physio balls, balance cushions. While these products activate the deep muscles due to their range of motion, they are not individually tailored to the needs of the user.

A team of scientists, Hominiseat, is developing a personalised sitting device controlled with feedback of trunk muscle activity. Scientific experiments in which muscle, brain activities, and body movements of sedentary workers were analysed confirmed the suitability of the chair in the work environment to prevent musculoskeletal disorders caused by prolonged sitting.

Prolonged sitting is harmful to health

Ieva Aleknaitė-Dambrauskienė, a member of Hominiseat, a physiotherapist, and a researcher at the Biomechatronics Laboratory of the Kaunas University of Technology (KTU) Institute of Mechatronics, states that many people who work in sedentary jobs complain about lower back pain. Often these individuals also rest at home while sitting.

“Sitting is not inherently bad, but a prolonged being in one position, which varies very little throughout the day, eventually causes back pain. This problem exists not only in Lithuania – statistics show that about 37 per cent of Europeans work in sedentary jobs, and the number is even higher in the United States,” says a KTU researcher.

Sitting on the usual non-ergonomic chairs, which can be found in most of the offices around the world, can cause serious health problems.

Employees who experience back pain due to faulty posture find it difficult to concentrate, make decisions, and absorb textual information. According to the KTU researcher, the muscle-stimulating chair developed by Hominiseat does not allow poor posture because the brain centre responsible for the balance is constantly activated by nerve impulses.

This office chair is exceptional

Compared to other ergonomic chairs, the invention will change the user’s posture by stimulating the deep muscles of the trunk. The seat of other office chairs on the market can move freely around its axis, the degree of instability is not adjustable, and there is no possibility to change the amplitude of motion. The chair, designed by a joint team of scientists, will have these functions, so the ergonomic seat will be able to adapt to the safe level of instability and cater to the needs of each person.

“Although we can already see chairs which work on a similar principle to our seating device, our product is the first of a kind in the world,” says Aleknaitė-Dambrauskienė.

The ergonomic office chair, presented at the virtual exhibition Technorama 2021 organised by KTU, is being developed incorporating the latest technologies. The wireless sensor captures trunk muscle activity, and the seat adjusts the user’s posture based on these parameters. According to the Hominiseat team, the data on the user’s muscle activity and body asymmetry could be used as fitness equipment, yet this will become apparent after the prototype is produced and tested in real conditions.

According to KTU researchers, the muscle-stimulating chair developed by Hominiseat does not allow poor posture because the brain centre responsible for the balance is constantly activated by nerve impulses.

It is projected that the device could function as both a passive and an active device: the user would be able to adjust the movements of the seat themselves, and the invention could move by stimulating the deep muscles of the human trunk. It is no accident that the activation of the lumbar muscles was chosen – the researchers believe that working in a sedentary job has the greatest effect on this group of muscles: the muscles that stabilise the spine undergo atrophy, and the nutrition of the intervertebral discs is disrupted.

“When deep trunk muscles perform a stabilising function, maintains optimal posture, then the forces on the spine and passive structures are not so damaging,” emphasises the physiotherapist.

The researcher emphasises that in the event of a disruption of one deep muscle group, other structures, such as the superficial back muscles, take over the work. Then there is constant tension, followed by back pain and other pathologies.

The prototype is being developed

If this innovation were made available to the general public, people who work sedentary jobs or spend a large part of the day in a static position would be less likely to experience the negative effects of poor posture.

“The benefits for the consumer would be huge – a person working in a sedentary job would have less back pain, he would be more active throughout the day, which would lead to higher work productivity and better results,” believes Aleknaitė-Dambrauskienė.

The researcher points out that the seating device could be mass-produced in Lithuania, but the market demand abroad should be even higher. Although there are enough materials and manpower in the country for the extensive implementation of the project, more attention to the employee’s health and quality work equipment is paid abroad. The prototype of the ergonomic chair project is already being prepared, so the next step is testing.

After winning second place in the Wanted: Life Sciences Innovator competition of the Agency for Science, Innovation and Technology (MITA), the KTU Hominiseat team has expanded. Currently, specialists from the fields of health, design, electronics, biomechanics, and employees of JSC Abili are working on the ergonomic chair project.

“Our team is diverse, as the development of such a product requires various knowledge and experience, and only in this way can we achieve the required results. Each specialist has their tasks which they perform best; constant communication and refinement of ideas allows each team member to focus as much as possible on their specialisation and make fewer mistakes,” says I. Aleknaitė-Dambrauskienė.

At the end of 2021, the project received European Union funding under the Technical Assistance Program (TMP).