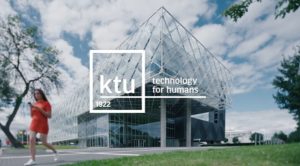 What is more important when you introduce yourself to the world – “dry” facts or emotions? In the newly launched video, Kaunas University of Technology (KTU) is introducing itself playfully and with humour pointing out the imperfection of humans. We trip, we fall, we forget and make mistakes, but we have the ever-evolving technologies to help us.

The new KTU brand video is aimed at wide local and global audiences – current and prospective students, the academic community, businesses, policymakers. The video is in English as internationality is one of the main strategic priorities of the University.

In collaboration with KTU Marketing and Communications, the idea for the video was conceived and implemented by Milk creative agency, which had been elected Baltic Agency of the Year for three subsequent years.

“Somewhat stereotypically, a university of technology sometimes is considered to be an anonymous self-centred community of dull engineers. This is not true. At the university, colourful personalities are teaching, conducting research and creating new ideas, they are people who have exciting professional and personal lives, who possess “hard” and “soft” competences.

That’s why in the new video, we decided not to describe KTU in “dry” facts, as it is common among the majority of higher education institutions, not to list the numbers of students, faculties, research institutes, study programmes. We took another path – we attempt to evoke emotions to the audience and by doing so we are sending the message that the University is a place where knowledge, technologies, innovations created by humans for humans are being born”, says Šarūnas Bulota, Head of KTU Marketing and Communications.

In such a way, according to Bulota, the video expands the slogan “The human side of technology”, which KTU introduced in spring.

“This is not your typical video. It doesn’t show the things that you’d traditionally expect from a university. Until the very end of the video, nobody even mentions KTU as there is no point to compete with others by showing contemporary research equipment, study spaces, etc. It is a conscious decision in the video to mainly talk about the humans being imperfect, clumsy and weak.

The end of the video reveals how one of the situations is solved by technologies, and in such a way the audience can make their own conclusions about the necessity of tech. Among the competitors, KTU demonstrates fresh and relevant attitude. This video introduces KTU as a university, where the human side of technology is being studied”, says Rimantas Stanevičius, Creative Director and Partner at Milk.

Although the title of Kaunas University of Technology is revealed for the audience only at the end, KTU settings are serving as background in many of the scenes in the film.

All the factual information – numbers, stats, interesting facts – is posted on the video landing page enterktu.lt. On the page, the information is sorted according to the audiences: for business, for the academic community and for students.

Interested in studying at KTU? Chat to our students